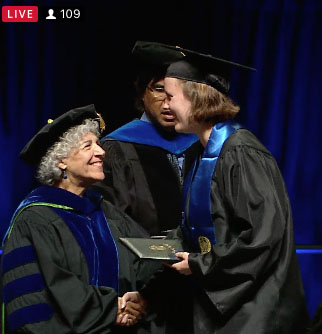 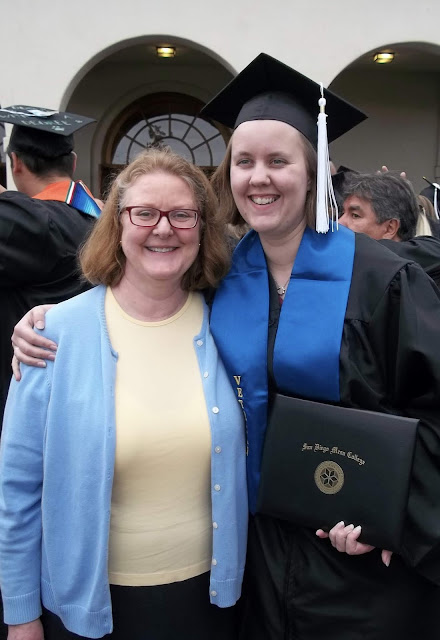 Noble has followed the counsel of the prophet, Gordon B. Hinckley, to seek learning! She served in the Air Force, as a Korean Linguist; now she has an Associates of Arts in English. And she's transferring to a university in Minnesota to pursue a Bachelors in Asian Studies and Languages with a Korean emphasis! Her blue stole indicates that she is a Veteran. Way to go Noble!!!
Posted by Rozy Lass at 2:23 PM 1 comment:

This is a talk I gave two years ago:

The Eternal Nature of Mothers

Twenty-one years ago preparations were underway and reported on in the news for an upcoming World’s Conference on Women, to be held in August 1995 in Beijing, China. Many voices clamored for recognition, and spouted slogans demanding increased rights for women, including abortion on demand, freedom from the slavery of marriage, and recognition of the validity of same-sex relationships.  After listening to radio reports and reading newspapers and magazines, I longed to hear what the Lord had to say about all this, knowing he would speak the truth through his prophet.

Days and weeks went by and no statements were forthcoming from the church. I had a heavy heart and a thirst for the word of the Lord.  I kept a prayer in my heart that the Lord would make his will clearly known concerning the issues the world found so troubling.

Tears of inexpressible gratitude fell as I sat in the chapel for the General Relief Society Broadcast on September 23, 1995 and listened to President Hinckley read: The Family - A Proclamation to the World.  I knew the Lord had answered the deepest longings of my heart.  Here was the bread of life for a world in the midst of a famine of the word of God; Living Water for a drought stricken people; a sword of truth to cut through the war of words.

We are so blessed to have pure, simple and true doctrine about the family, about men and women’s roles as husbands and wives, and as fathers and mothers. We learn that these roles are not temporary for earth life, but are part of an eternal continuum stretching from before we were born, through earth life and on into eternity after we die.

The family, beginning with a man and a woman married in a covenant relationship, is an eternal pattern. We are spirit children of a Heavenly Father, who obviously is not alone, but partnered with a glorified and perfected woman. The story of the creation in the book of Abraham refers to Gods, plural, who participated in creating this earth and all things on it.

“So the Gods went down to organize man in their own image, in the image of the Gods to form they him, male and female to form they them.” (Abr. 4:27)

I had learned to call thee Father, Thru thy Spirit from on high,
But until the key of knowledge was restored, I knew not why.
In the heavens are parents single? No, the thought makes reason stare!
Truth is reason; truth eternal tells me I’ve a mother there.
(Hymns #192)

Throughout the scriptures are stories of great mothers. They are not considered great because of their education, careers or other worldly attainments. Their greatness comes from their obedience to God and their faithfulness to the Plan of Happiness.

I give my solemn and humble witness of these things in the name of Jesus Christ, amen.

Rozy Lass
Rozy is an old-fashioned sort who likes to make friends and share some womanly wisdom and humor.

Comments let me know that someone is reading this!! Let me know what you think. If you want to contact me directly send an email to rozylass(at)gmail(dot)com.